Soya chunks is a derivative of soya bean, made from defatted soy flour, a by-product of extracting soya bean oil. It’s a great high protein food source perfect for vegetarians and vegans. It’s quite popular among non-vegetarians too for their meat-like texture and density. With many people shifting towards vegetarianism and veganism, soya chunks are a great choice for making tasty recipes as well as to get in their protein intake.

Soya chunks is a Textured Vegetable Protein (TVP) or a Textured Soy Protein (TSP). Soybean oil is extracted from beans and the residue or by product left behind is called soy flour. Incidentally, the flour led to the formation of soya chunks and with all the oil removed from it, it is ideally fat free.

Many people tend to believe that consuming soya chunks could increase estrogen levels in men. However, this is something that has not been scientifically proven yet and there are no studies that suggest the same.

In terms of nutrition, 100g of soya chunks has about 345 calories with 52g of protein and considerably less fats.. However, note that these are raw values. Once soya chunks are cooked and absorb water they increase significantly in terms of volume.

They also have a good amount of calcium, minor traces of iron, Vitamin A, Vitamin C and many other nutrients which makes it a great food source overall.

Acts As A Meat Substitute

If you’re a vegetarian who is not able to meet his protein intake for the day, consuming soya chunks is a great way to do this. Being low in fats as well they’re a great food source to incorporate into your diet to help you reach your fitness goals as well.

Soya chunks being a veg source of protein as well, has a good amount of fiber. The fiber in soya chunks keeps you satiated and full for a longer time. Therefore this keeps you from snacking on other food items. Also, when taken in the right amounts according to your calorie intake, it can help your weight loss journey as well.

Due to phytoestrogens in soya chunks, women with irregular hormonal activity can eat soya chunks regularly. It’s especially good for post menopausal women and those suffering from PCOS.

Soya chunks work to reduce bad cholesterol in the body as they are rich in omega 3 fatty acids, protein & fiber. In addition the good cholesterol prevents several ailments making soya chunks a food source great for the heart as well.

Consuming soy foods could have multiple beneficial effects on human health. It could reduce the risk of inflammation related diseases such as cardiovascular diseases, diabetes and certain cancers.

The long overdue debate whether the side effects of soya chunks include increase in estrogen levels in men is just a myth right now as it is yet to be proved yet. Consuming high amounts of soya could potentially increase uric acid in the body. However, these effects are valid only for those who consume soya chunks in large quantities. A good amount to consume would be 25-30g if consumed on a daily basis. Overall it’s a great food source with many benefits. So make sure to eat it in moderation and rejoice it’s benefits. 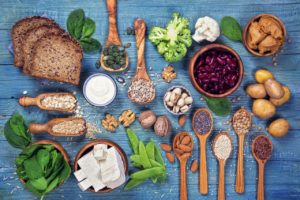